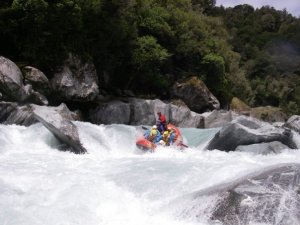 …and here’s some of us having our Christmas lunch in Fiordland: https://www.dropbox.com/sh/91dml0f4lne1ho6/X_pkzFPwK3

The sun, as demanded, returned in all its glory to shine upon the absolutely best bits of NZ for the rest of the trip – much to the relief of the frantic stressed tour guide (me) 😉

I have to say this part of NZ is absolutely stunning. We drove from Wanaka leaving the rain behind us to the West Coast – “tropical rainforest wild coastline type” area to the glaciers – to stay in Franz Josef – the back of beyond….did the most amazing helicopter flight up onto the glaciers with a snow landing for the boys to throw snowballs at each other while I photographed everything in sight ;-)…anyone would think we’d never seen snow before – but then again you don’t often see it the same day as rainforest mountains andcrashing waves on pristine beaches J

This was followed by the best day of the vacation by far (if you like grade 4 white water rafting I suppose! – who wouldn’t??;-)). We were helicoptered into the Whataroa river basin (extremely cool in itself – think I’ve developed a bit of a taste for helicopters….if my numbers come up on the lottery I might buy one!)……then spent the day trying to avoid drowning/serious injury (tragically I broke afingernail which cramped my paddling style somewhat but then most of my lipstick had disintegrated in the first waterfall so I had kinda given up looking respectable by then anyway 😉 )…it was absolutely the most spectacular scenery we’ve ever rafted in. None of us fell in for once(well – it’s either Gary or Geoff to be honest) – being the well practiced rafters we now are……it was relatively challenging which was excellent fun (none of us could move for the next 24 hours despite spending the evening afterwards in a dodgy plastic rock spa in FJ in the forest;-))…..there was rather more hiking through the rainforest and rock climbing than I would have anticipated for a rafting trip – but it transpired that all the days of rain before we arrived increased the water level to interestingly dangerous heights so we had to climb round the really baaaaaaaaaaaad waterfalls instead…interesting for one who would rather die than go rock climbing in rubber wetshoes….the gorges alone were worthrisking your neck for anyway…even Gary smiled (so it must have been reallllllly good) despite the fact he had to keep moving all day and he couldn’t get a beer ANYWHERE on the river ;-)….we were very proud of him…tee hee…. 😉

Apologies for the strange water blobs on the photos…..it was kinda wet out there;-)….and obviously we didn’t take the reallllllllll action shots…. we’re the only ones wearing baseball caps and sunglasses…..in case you don’t recognize us (me!) without a full layer of lipstick 😉

Anyway….anyone as nuts as we are when it comes to rafting may want to add this one to their list….it was REALLY awesome– and I say that using the real meaning of the word J….

The next day we rushed back to Wanaka to take the world’s most expensive scenic flight to Milford Sound….crossingmore mountain passes, roaring rivers, snow capped Mount Cook……more rainforesty stuff…..all Lord of the Rings movie scenery – so not exactly dull…..and took the cruise round the Sound (really a fiord and not a sound at all)…again spectacular (not much on the south island is NOT spectacular except the east coast!)……some of the photos might give some essence of the scale of the place if you can spot the cruise boats at the bottom of the mountains as they plunge into the sound….. 😉

Swiftly moved on to Queenstown – which was OK – bit too touristy and back packer filled for us but it is the centre of the universe for many of the lunatic sports…..wild horses wouldn’t drag me to a bungee jump so we managed to fill the remainder of the days with more water based activity…..went on the “world famous” Shotover river jet……which would have been much cooler if we hadn’talready risked life and limb rafting the Whataroa…it was a bit more of a Disney experience than hoped for….though it was quite good fun to hurtle 12” away from huge gorge walls at 85mph and spin 360 degrees in 10” of water…..preferred the Dart River Safari – more of the same – jet boating – gorges…..snowy mountains…..turquoise rivers……….where lots of the Lord of the Rings scenes was filmed…in a place justifiably called Paradise…..except for the sandflies  😉

Christmas day was a total non-event – the Kiwis don’t seem to know much about it there…we did spot some ancient frayed tinsel in a store on Christmas Eve but aside from that they don’t appear to have been enlightened in the ways of 2 months of full-on town andhome decorations and panic buying….we managed to liven the day with apicnic in the mountains with the Kea’s (Mountain Parrots) who, due to the fact the visiting Japanese (of which there about a billion every year it seems) couldn’t read the signs saying “don’t feed the Kea’s – it’s bad for them etc etc”, were extremely friendly – though having sampled the Kiwi version of Mince Pies it became obvious that they preferred pecking at my handbag…..I think they made the right choice ;-)…..we have obliterated the memory of Christmas dinner at a local hotel that evening…..the only place open in a 100 mile radius from Milford Sound……..the fact we didn’t get food poisoning is a bonus for which we are grateful……if McDonald’s had a carvery – this place would have won a franchise…..enough said…..

Anyway……I think we’ve covered just about everything conceivably possible to see/do in OZ and NZ in only 4 weeks……everybody should see NZ J…it’s FAB J…oh and anyone thinking about it needs to save up and go first class – Quantas is kinda special J……anything less must be truly horrific…..it’s a loooooooooooooooong way to go….and definitely avoid Air Tahiti Nui – they are hideous….unless you like 1970’s economy conditions…and that’s their first class….poor Geoff was stuck back in business– think cheap economy on Azerbaijani Airways….for 18 hours……and that’s just Sydney to LA…then you still gotta get home from LA… niiiiiiiiiiiice….!