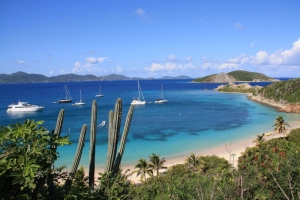 Just a quick postie from the BVI’s – belated – very – but life has been the usual chaos since returning 10 days ago…..so I suppose this is actually arriving around the time a real snail mail postie would have done! 😉

Needless to say the BVI’s were relaxing……fabulous…fun…..and we need to live on beans for a few weeks for the credit card to recover from its abuse 😉

Stayed on Tortola for 2 nights….were “upgraded” to a beach bungalow on the islands BEST resort – we remained thankful for the duration of our short stay that we HAD been upgraded as one shudders to imagine what the other accommodations would have been like ;-)…luckily the beach was fab….and in any event we were really only there to briefly explore the island – which was very laid back – totally un-americanised – unsurprisingly for  a “B” VI !!……stunning water and beaches and some lovely beach restaurants……

The next day of frantic exploration (which was similarly unstressful for one of our vacations!) was spent taking a ferry over to Virgin Gorda for the day…..pottering about in a rental car with no brakes up and down the steep hills of the island – highlight…another totally fab beach  – deserted as most of them were – and the Baths…which I have wanted to see since I was a spotty teenager trawling through the fashion mags and wondering how I would ever get to see somewhere so “exotic ! :-)…..

….best not to choose cruise ship day of course – but they all returned to their ships by midday whereupon the baths and the caves were pretty much ours for the remainder of the day 🙂

The rest of the week was spent in absolute luxury with friends on Peter Island – a ridiculous but fantastic 5 star all-inclusive resort which owns the whole island………many millions of calories were consumed with the result that all 4 of us bore a resemblance to the Michelin tire man in a bikini/speedos (for the boys)!-  yikes – hope that image won’t haunt you 😉

As there was really nowhere to go except the various beaches – which were reached by golf cart summoned at the guests whim etc etc….we spent mornings snorkelling with some rather lovely fish in amongst the surprisingly untrampled coral reefs…..back for a 3 course lunch (or picnic brought to you by nice man in said golf cart to the snorkel beach)….followed by vast quantities of Pina Coladas and something lethal (but highly recommended) called a Bushwhacker…..:-)…then once we had all recovered from our stupors we managed a few hours of racing around the bay in the islands catamarans ……then more cocktails…..dinner …more socializing and more cocktails…..our friends arranged a sunset trip (more cocktails and canapes) to the highest point of the island one evening which was lovely……

Obviously it wasn’t too taxing as vacations go – although I think Geoff and Will might have found “the girls” frequent shopping trips to the island’s boutique and the spa shop reasonably stressful ;-)……we’ve never been marooned on an island for 5 days before so it was quite something for us to achieve so little in an entire vacation ;-)….I think we could PROBABLY manage it again!! 😉