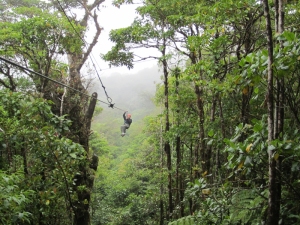 We decided to escape again from the commercial nightmare of tinsel and baubles, too much Christmas pudding and bad TV this year and headed south with G’s best friend Gary to enjoy a more eco-friendly type of annual festivities in the rainforest 🙂

As we are somewhat pro Latin America we loved CR from the moment we touched down in San Jose amidst the mountains and colorful shanty town buildings.

The guy at the Avis rental car desk spoke immaculate english which was a relief as I had had a week of sleepless nights panicking about all the Spanish I had forgotten (erased by learning Italian for our September European adventure 😉 ). Perhaps I was less enthusiastic about his command of my language when he gleefully warned us about all the horrible things which might happen to us in his beautiful country… “bandits” being just one of the selection of possible life threatening events who may leap out from every dark corner and steal everything we own…including the car…so we got the extra insurance-  obviously……umm….we glossed over the worst of the advice and headed out into the countryside for 8 days during which we met only the most friendly, polite and helpful people we have ever met…..not a single bandito in sight 😉

My espanol came flooding back and the Costa Ricans we met were extremely tolerant and patient whilst I crucified their lovely language…although to be fair they did understand everything I said which pleased me greatly. Surprisingly, they were similarly tolerant of Geoff’s somewhat futile attempts to learn more complicated words from me and thoroughly abuse them in a manner which still gives me nightmares…..good job they all had a sense of humor 😉 !! He’s got the basics which is good but can’t quite get his tongue round the more lispy stuff!!

So..first stop…Arenal Volcano…..shrouded in cloud…huge……saw the top of it for perhaps 5 minutes whilst luxuriating in its warming hot spring waters for the afternoon after a particularly hot, clammy, and mercifully short rainforest hike to Fortuna waterfall..as we were already drenched from head to foot the hot spring seemed a natural choice for the rest of the day….tough I know.. 😉

It rains a lot in the rainforest 😉 Everywhere is very green – CR is the greenest, most fertile country I have ever seen in this hemisphere – amazing tropical plants and flowers one usually only sees in the exotic section of the local garden centre grow wild here like weeds… I swear if you stood still long enough in the volcano/mountain areas of CR for more than 5 minutes you’d start sprouting an orchid..it was fabulous 🙂

On to the Rio Celeste waterfall area and to the hardest hotel in the world to find…..thankfully I had talked the boys into getting the GPS at Avis – I had a premonition that the maps just weren’t going to cut it…interestingly the GPS insisted upon taking us off roading for a lengthy period of time across some of the worst off roading roads we have ever driven – and we have done quite a bit if it in our time – craters…mud slicks….portions of road completely washed away……having endured G’s off roading for a good 45 minutes or so we finally arrived at a collapsed bridge – allegedly close by the hotel and had to turn back to the main road again and find another equally interesting route in….when they say the roads in CR are some of the worst in the world they are being generous!!

The following day (our very purpose for being there) was, however, a 5 star disaster…..up at 6am for white water rafting…..hiked down to the broken bridge to cross it on foot and allegedly meet our tour guide to take us to the rafting site – a 7.30am meet and none of us like mornings…at 8.15 a rickety old van appeared on the dusty track (in the course of 45 minutes lurking aimlessly in the wilderness Gary was peed on by a local stray hound (CR is not short of small yappy stray dogs in desperate need of a trip to the vet for a quick snip)…to be fair that became the high point of the day …..to cut a long story short…the driver told us he’d got stuck in the mud (hence late) and then proceeded to drive us formula 1 style across the off road roads without so much as a slick of mud in sight…..took us to a miscellaneous café (clearly owned by his friend) to “buy coffee”….I am sure I managed to communicate my concern that we were already 45 minutes late and really wanted to see some water in a river bed without much further delay…..so we sat there for 15 minutes and eventually he got the message…..he said we would be meeting the raft group at a point 10 minutes away…..so we got back in the van and flew straight past the raft site – obvious to a blind man from the rafts piled up at the side of the road….and on for another 45 minutes whilst I continued to enquire where the hell he was taking us…..so at 10 am we arrived at the main raft headquarters to see a large tour bus depart full of people dressed for a day of fun on the water…..we, however, were greeted by a grinning cherubic local who happily explained to us that we had a problem….apparently the rafts were all full and we couldn’t go until the afternoon – a 4 hour wait in the middle of nowhere….as you might imagine the air was blue – in english and espanol and the idiot driver, his silly cherubic guide and the ghastly woman who had sold our spaces (booked no less than 3 months before) learnt some new phrases they weren’t expecting…..no end of shouting was going to rectify our sorry position so I simply demanded that the idiot return us immediately and directly to our hotel whereupon I would spend the rest of my life (and certainly the rest of the day) complaining to all relevant travel websites about their dishonesty, lack of moral fiber etc etc….

As it turned out, once we eventually got deposited back at the hotel at about midday (exhausted and battered by more off roading) we had a rather nice hike through the Rio Celeste rain forest (hot and pretty heavy duty) and I managed to contain my anger until the evening when I wrote a snot-a-gram email to the tour agent I had booked with and expected to hear nothing back…..the groveling apology I received the next day and obvious unhappiness of the agent about the treatment of one of their beloved clients by the unscrupulous rafting company did something to alleviate our misery and did at least culminate in offers of free trips in lieu….to be taken if we ever go back (which is likely)……sigh……decades of planning vacations and this is the only time we have ever been left high and dry and certainly without any running water on which to while away the day 😦

After that everything went swimmingly….an interesting cross country trip (round volcano really) to take the ACTUAL worst road in CR….the mountain pass to Monteverde Cloud Forest Reserve…..more collapsed road, huge holes, crevices, battered spinal columns….Christmas Eve lunch was an unidentifiable meat pie purchased with some trepidation from a bakery in the only town for miles and “enjoyed” at a fog enshrouded point somewhere along the dirt track up to the mountain…G was searching desperately for a nice viewpoint (which was definitely out there somewhere) but in the end we shared lunch in a smelly truck we’d been driving in all day shrouded in a blanket of white 😉 Luckily the hotel was all that I had anticipated – a very cool tree house where monkeys steal anything you are naïve enough to leave kicking around without welding it to the ground. Christmas dinner was infinitely more remarkable.

To be fair I suppose we might have expected a cloud forest to be cloudy….and it was absolutely spectacular in it’s own way…..weird jungly sounds..hanging bridges…..mist….tree canopy tops below us….rushing rivers…..endless water everywhere….not a bird or interesting mammal in sight because they were sensibly hiding from the incessant drizzle UNDER the canopy and we were on top of it 😉

The highlight of Christmas Day was not to be ruined by a little (more) rain and we spent it gleefully ziplining across the treetops….everyone needs to do this….you are harnessed onto a steel rope strung between 2 very high trees (drops of up to 300 feet are not uncommon) at the top of the forest and pushed off a perfectly good platform into oblivion….as you couldn’t see more than 15 feet ahead and some of these ziplines were a kilometer long the cloud cover added an exhilarating extra frisson to the whole experience as you really had no idea where you were zipping to and just had to hope that there was actually a tree at the end of the of the long, solitary and rather speedy ride in the clouds. Naturally we loved every second…it was the best thing we’ve done since the last time we jumped off a mountain or strapped parts of ourselves to some other fast moving and precarious contraption!! 🙂 Gary impressed us greatly by doing it too…despite some total stranger telling him 3 days before that they knew someone who broke both legs doing it…..he was only green for the first leap into oblivion and then obviously loved it too…he’ll be hang gliding before you know it 😉

So..what more??….we didn’t see the sun (or take off our sweat shirts which weren’t in the best shape by that stage) until we left the mountains and dropped down to the Pacific coast…stopping en route at a butterfly farm which I had been desperate to see since we got there….it was run by an interesting little man in a mosquito infested forest….whose main love in life was clearly the nasty collection of deadly snakes and weird frogs he had acquired….if anyone needs to know how to kill a man stone dead in 20  minutes with no post mortem evidence we know the snake you need…or frog …come to that…..to be honest that was all a wee bit creepy but finally I got to see my beloved butterflies as they fluttered about our heads and in the flowers….blue ones the size of hands…..ones with camouflage to look like owls and rattle snakes…I loved them all :-)……the tour ended with a giant bullfrog peeing firstly horizontally and then all over his hands as the funny little man demonstrated something which has now been lost to me in the sands of time and superseded in memory by my abject horror as he tried to shake hands goodbye with us all…..somewhat to my eternal shame I couldn’t help bellowing “frog peeeeeee” across the car park to G as the guide went bounding towards him with friendly arm outstretched…..a tour filled with far too much information about limbs that drop off and poisonous dart frogs for my liking……I hope he didn’t understand 😉 😉

Then on to the Pacific coast and to the jungle bungalow with the view of the Ocean….nice place but 1970’s décor isn’t really our thing 😉 We were there for 3 days of beach relaxation which we did actually need by then..and most of all to go Manuel Antonio National Park to see the sloths and the howler monkeys and the white faced capuchin monkeys (which are the “hoody” holligans of the primate world so we didn’t love them so much )..and the toucans….and more exotic foresty stuff……we saw them all and I left a very happy glrl as I love weird furry animals and I got to see my first sloth 🙂

So….loved it…..would go back…..maybe not in December which is a transitional month for the rain forests……lots of weird fun stuff to do….food excellent….lots of really fresh fish and organic veggies…..awful cocktails which is better for the waistline of course…there is always an upside……you don’t need to speak the lingo but it is far more fun if you do!! 😉