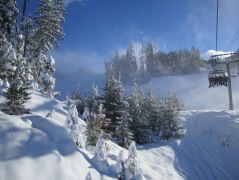 This time we tore ourselves away from Colorado and headed to Whistler, Canada – not entirely planned and not entirely enthusiastically on my part due to reports of generally grim, cloudy days skiing in the Pacific Northwest – and more specifically and disturbingly – an almost total lack of snowfall since Christmas  😉

As luck would have it, the weather reports suddenly changed as we were packing our bags at home in 80F and instead of expecting to spend our skiing vacation sitting in the rain in a hot tub it suddenly snowed (6 weeks later than normal) and we arrived to a winter wonderland and 14″ of fresh powder – with more to come – yippee!! 🙂

Our arrival at the hotel was slightly less than auspicious, however. After 12 hours of exhausting travel from the bottom right hand corner of the US to the top left (and beyond), fatigue was beginning to take its toll by the time we checked in. Handed our keys to the apartment (which we would be sharing with old ski/travel buddies, Mike and Carmen who would be driving up from Washington to meet us) we headed down to the underground car park to unpack the car, unload the skis/board, grocery supplies for 4 people and the other 3 tons of paraphernalia required for a weeks skiing…. As I searched about the car park for an oversized luggage cart an alarm went off deep in the bowels of the car park. We studiously ignored it (due to general exhaustion and disinterest in anything other than crawling into the shower, finding somewhere for dinner and crashing for the night).

After 15 minutes or so (literally freezing to death in the car park as our gloves/hats/coats/boots etc were all safely packed in our luggage, of course) the cart was piled high and we headed (with no thoughts other than trying to defrost) towards the elevator – the alarm still ringing in our ears …. and only vaguely in our collective subconscious!

With hindsight, and in the final analysis, some incredulity on our parts (once we had warmed up sufficiently to be thinking straight) we dragged our luggage towards the elevator, got in, squeezed in our every possession and exhaustedly hit the button to ascend into the warm. En route, we both commented that it was odd that the fire alarm was still ringing – some idiot had probably burnt his toast etc etc….

As the doors opened on our floor we were greeted by a wall of thick grey, choking smoke, whereupon I may have said “Oh, sh*t ….”. We both pounced on the “close door” button, “parking lot” button and hoped that the elevator wouldn’t stop midway and we wouldn’t die choking to death before we had even had a chance to enjoy the lovely fresh Canadian powder falling all around us.

Still kicking ourselves and unsure what to do next (re-pack the car – another 20 minutes task at least – and hot foot it out of there – literally), or try to find out what was going on… etc etc..

Geoff decided to run round to the entrance of the hotel – knee-deep in snow by now – and ascertain whether the hotel was actually burning to the ground or not….

I stayed underground (not the best place for someone with slight claustrophobia ) with our luggage piled high still freezing and now considerably stressed out…. it being the middle of ski season in a top resort and there being a less than zero% chance that there would be any other accommodations available in town for the week 😦

Another 10 minutes of ear splitting alarm passed whilst I waited in the car park (wondering if I should have gone out into the snow too) and eventually Geoff returned huffing, puffing and covered in snow bringing stories of utter aboveground chaos. The whole hotel had been evacuated, people were standing in the snow wearing night clothes, towels (the unlucky ones had been caught out in the shower), blankets etc etc and every cop and fire fighter in town were busily investigating whilst the thick smoke continued to pour out of the windows.

It seemed the worst of it was on the 3rd and 4th floors – according to chinese whispers – bliss – our room (in a fully booked hotel) was on the 3rd floor.

Finally, abandoning our possessions we trudged out into the snow with heavy hearts, not quite sure what to do and not remotely thrilled by the thought of driving back to Vancouver at that time of night in the snow and sleet which we had just driven through to get to Whistler 😦

Absolute chaos – the staff had no idea what was going on – everyone was shuffled into the lobby of the hotel next door before hypothermia set in and/or guests started to drop dead in the road – the fire fighters and police weren’t giving out any information so we settled in for a long night listening to reports from people that nobody would be staying in the 3rd or 4th floors and that we’d all be sleeping somewhere else – just not sure where in a fully booked town…. SERIOUSLY???

Of all the weird and wonderful inconveniences and minor travel disasters we have to deal with over the years it had never entered my head that a hotel in a ski resort up to its neck in snow could POSSIBLY burn to the ground!

Taking advantage of the opportunity to re-fuel before our anticipated long drive back to Vancouver, we sat down to dinner to wait it out and see what they were going to do with hundreds of displaced people with no clothes and no possessions. It gradually dawned on us that if the hotel did actually burn to the ground and collapse into the car park it would take our skis and everything we owned with it too 😦

….. interestingly… despite the unbelievable quantity of smoke filling the plaza around us we still hadn’t seen any actual flames…

Geoff took an executive decision to try to go back into the car park, rescue the car and save what he could etc etc….. assuming the fire fighters would let him anywhere near it, of course ….brains still not functioning fully etc etc 😉

On his way back through the snow to the back entrance of the car park he fell upon a huge pile of smoldering clothes outside the car park entrance and a group of fire fighters. It transpired that some (other!) blithering idiot had managed to set fire to a dryer full of clothing in the basement laundry (about 50 feet from where I had been patiently waiting about 3 hours earlier guarding our possessions) and the smoke had risen straight up to the 3rd and 4th floors through ventilation ducts.

Good news – the hotel wasn’t going to burn to the ground in -5F after all 😉 …..but also bad news – the room may be uninhabitable due to smoke damage …..

Still….the fire department was busily using huge industrial blowers to blow the smoke out of the building – fingers crossed …

By this stage we would have slept in the car if necessary and risked frost-bite rather than take the mountain road back to civilization.. As we were discussing options from the warmth of a bar where we had a great view of the chaos we suddenly noticed a mass exodus of bath-robed guests crossing the knee-deep snow again and back into reception…..Yippeee!! After hours of relative misery (at the end of the day we were, at least, dressed in slightly more than a bath towel and a pair of bathroom slippers 😉 ) and visions of a doomed skiing trip we were allowed to check back in to a miraculously smoke free apartment, hit the sack and pretend it had never happened 🙂

The following morning we awoke to a LOT of fresh powder and, thereafter, rather boringly for the purposes of our blog, everything else was fab 🙂 Unexpectedly blue sky, fabulous views from Blackcomb Mountain towards Whistler (and vice versa), long (some 5 miles – yikes!!) scenic runs, great company, lots of laughs and reminiscing, good food, silly games (and the only occasion I have ever come within a gnat’s breath of winning Trivial Pursuit – albeit I cheated at every opportunity to get that close 😉 )  …and Geoff (of course!) managed to be the last person up on the chair lift for the final run of the day… and the last person down the mountain! 😉

So … Whistler isn’t Colorado, or Utah… or Montana (our friends’ favorite) … the “powder” isn’t dry and fluffy like floating on clouds as it is in Colorado… it is slightly damp and much heavier, and accordingly, much harder to ski for old lazy people 😉  …but it was great fun…  We are still not mad about the man-made purpose built “ski village” (preferring the real wild west towns and natural hot springs of Colorado) …. but we would go back if the opportunity arose… just fingers and toes crossed for snow and blue sky – usually (according to the locals) not a “given” – odd for what is consistently rated as the top resort in North America (uuummmmm… still not quite sure why…. but we did have a great time!) 🙂

And so finally, back to Vancouver – for the second time in 6 months – and straight back to rain, freezing winds, grey sky and general gloom – just like summer in Vancouver, in fact!! We MAY have been really unlucky I guess, but I would swear that the climate in this city makes that of England look positively balmy … 😉 With little else to do on a rainy bleak afternoon we had to endure a double massage to try to straighten out our battered (and in Geoff’s case – bruised) bodies 😉