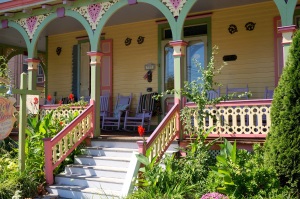 Looking for somewhere to fill in the intervening week up north between art shows in Alexandria, VA and Philadelphia, PA, we were reminded of some old friends’ suggestion that we might enjoy a 3-4 day visit to Cape May, NJ if we were ever at a loose end. A hard act to follow after the sophistication of Alexandria famous for its fabulous colonial homes, cobbled streets, excellent restaurants and miles of boardwalk running along the Potomac River with views towards the National Harbor and Washington – the State Capitol and the Washington Memorial visible on the horizon in the far distance… but we were prepared to give it a shot 😉

Fall was just starting in mid-September which is our favorite time of year pretty much everywhere 🙂 , however, this was not the luminous technicolor fall of New Hampshire or Maine in October but a more subdued, genteel version with light golds and browns which reminded us more of an English autumn.

That, however, is about as genteel as it got – from then on, all bets were off – whoever manufactures house paint in southern NJ is obviously worth a packet – preferably, the gaudier the color, the better. The city regulations clearly require as many discordant colors as possible on each dwelling – and with an absolute prohibition on painting your house in any color which does NOT clash hideously and violently with your neighbor’s house 😉 I am guessing that the historical connection with the real Victorian England is tenuous at best as we have never, in all of our years, seen an english Victorian house in sky-blue pink with purple soffits and turquoise steps … perhaps we haven’t been looking in the right places??! 😉

That said, these homes do make an interesting artistic statement and I, in particular, enjoyed strolling the streets for that alone – in addition I got to enjoy the start of fall… to kick a few fallen leaves in the beautiful, sunny autumnal weather – still warm enough for the sound of cicadas to fill the air and waste a few hours on the beach paddling 🙂 Or should I say, dodging death by wave? Bearing in mind we enjoyed the calmest of blue sky and puffy cloud weather with only the mildest of sea breezes, this has to be some of the roughest, unpredictable sea we have ever almost been killed by 😉 …… from gentle swell into 15′ overhead armageddon waves in the space of minutes. What it must have been like along the beach during Hurricane Sandy is too terrible to contemplate. The surfers in the town are not only good but also obviously crazed lunatics – Geoff – a previously enthusiastic surfer from his mid-20’s (until we moved to the land of the lapping wave on the Gulf Coast) did mutter that he wouldn’t have tackled those waves without a lifeguard back-up on hand 😉

I managed to drag Geoff away from work for a sunset walk at Cape May Point State Park – when we arrived there was much whispered excitement at the hawk observation station. On a personal level I was more impressed with the vast collection of giant lenses, priceless photographic equipment and binoculars trained eagerly onto the marshland whose owners were waiting for a glimpse of hawks, kestrels etc etc …… all of which we can watch in peace, privacy and tranquillity over a morning cup of tea on the lanai back home 😉 I’m not much of a bird spotter but all I could see were ducks and a few swans despite the bird watchers enthusiastic chatter, occasional hushed silences (when the tension in the air was almost palpable 😉 ) and the superfast shutter activity.

Slightly off the beaten track from the excitement of the hawk spotting platform we wandered through boardwalks and trails, through shoulder high bulrushes and wildflowers, watching the Monarch butterflies and dragonflies fluttering around our heads and pottered aimlessly through the last of the summer daisies and fall flowers 🙂

In addition to ambling through the multi-colored suburbs back in town, running the length and back of the boardwalk every morning and watching the sun rise on the Atlantic was also very relaxing – we could have got used to that if it weren’t for the surefire knowledge that had we been attempting our 4/5 mile running circuit in the summer months we would have been hurdling thousands of strollers, equal numbers of walkers (not the 2-legged variety 😉 ) and trying not to slip over and break our necks on careless kiddies’ dropped ice cream cones 😉

So, for anyone contemplating a relaxing short getaway to Cape May, September is a perfect month to avoid the billions of summer visitors, the hideous parking, wall to wall people and overcrowded beaches…

There is a somewhat 1970’s feel about the place (specifically the clothing and jewelry stores and a good many of the eating establishments 😉 ) crossed with essence of  Stepford Wives in its picture perfection. Having experienced and/or rejected the allegedly “fine dining”options recommended by the concierge of Congress Hall (he clearly needed to eat out more 😦 !) we did eventually find restaurants fitting our organic, meat-free requirements .. so it wasn’t a total culinary disaster in the end 🙂 The best by far was the distinctly upscale Peter Shields Inn – obviously high on the list of all couples celebrating anniversaries, birthdays etc etc….. we rather enjoyed the inadvertent company of the couple next to us who turned up in their Sunday best and promptly asked the waiter to explain what “pricks fix” on the menu meant and then exclaimed wildly (for some considerable time) in disbelief that they would get all that food for one price….. the enthusiasm continued all throughout dinner with the arrival of each course, and, as the temperature at their table soared in proportion with their excitement they asked for a bucket of ice to chuck into their red wine 😉 Still, a good evening was had by all and the food was fab 🙂

In the long run, however, I suspect we couldn’t have taken much more of the low-key excitement of this place – the very end of the line of the New Jersey shore (and we certainly couldn’t have justified the calorific intake at PSI every night) . My suspicions were unequivocally confirmed when we saw the signs advertising the upcoming annual West Cape May Lima Bean Festival – then we knew for sure it was time to head back to the real world – to Philadelphia for some city life and to sell some art 😉