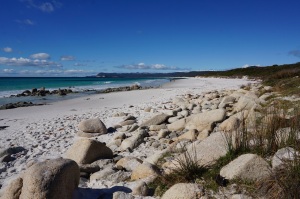 Tasmania – Australia’s southernmost island state. A land of 4 seasons in one day ;-).

Our weekend in the wilderness didn’t start entirely as planned. 10 minutes before landing in soggy, grey and rainy Hobart (forecast to be gloriously sunny), Geoff turned a whiter shade of pale and muttered that we might have a problem with the car rental…. In many ways it would have been less painful for him if he had just headed straight for the emergency exit door at 15,000 feet rather than admit that he had forgotten to pack his driving license ;-).

Unsurprisingly, the poor man behind the Avis counter was unable to change company policy for us which, again unsurprisingly, required sight of a valid license as a prerequisite for driving away with one of their prized possessions.

I am sure he had some sympathy with the stupid Brits who had flown all the way to Tassy for the weekend leaving their driving licenses safely stored in a hotel safe in Melbourne.

Still, he remained unmoved by our plight – marooned without a hotel in the height of season miles from our destination. We should have been crossing the island en route to Coles Bay in Freycinet National Park on the east coast of the island. This clearly wasn’t going to happen.

With true Aussie optimism he did mutter that we might also be hard pushed to find a hotel at the weekend in the middle of summer in Hobart… which came as no surprise at all to the designated vacation planner as it had been a challenge finding accommodation on the island in the first place :-(.

Obviously we were stuck up the creek without a steering wheel and had no option but to grab a cab, head to Hobart, and hope we could find a bed without fleas (or any bed) for the night as we are a little beyond sleeping on our suitcases in the airport waiting for the next flight “home” …

Happily, it turned out that Hobart is a foodie’s destination city which took some of the pain out of the unscheduled detour to the capital so we cheered ourselves up with lunchtime bakery delicacies to rival any great English teashop, and an innovative restaurant for dinner to rival any great city :-).

The sticky matter of the missing driving license remained to be resolved, however, if we didn’t want to spend the entire weekend in rainy Hobart (whilst, of course, we were still paying for a rental house in the National Park).

Let it never be said that miracles don’t happen.

Miracle number 1: a huge and very comfortable bed was finally located 200 yards from the centre of the Hobart universe (Salamanca Place) … from which we could, at least, watch the summer rain pour down the outside of the window rather than stand outside in it like a couple of miserable, drenched Dickensian orphans :-(.

Miracle number 2: the receptionist back at our Melbourne hotel agreed to rifle through our safe, search out Geoff’s license and overnight ship it to our unanticipated abode in Hobart … which really went far beyond the call of duty…

The 4th and perhaps the most miraculous of all miracles: the courier actually managed to locate us even though the street address on the business card for the hotel (to which we had requested the license be sent) didn’t really exist… don’t ask… 😉

Steering wheel finally in hand, we crossed the eastern part of the island at great speed.

When we finally arrived in Coles Bay, gateway to the Freycinet National Park, we discovered 2 things: firstly, Tasmania has 4 seasons and from our, albeit limited, experience of a typical Tasmanian summer’s weekend you will likely enjoy all 4 in 1 day; secondly, most people out in the Tassy boonies appear to favor living in flat-packed, corrugated steel modular homes – the rental properties are the same and they just don’t look quite as appealing in the flesh as they do online.

Consequently, we weren’t altogether delighted with our similarly flat-packed modular “romantic hideaway” on the beach ….perhaps it was a good thing that we had spent a night in considerably more luxury in Hobart after all ;-). We were also less than enchanted by the interior wildlife. There was some consternation when I spotted a crab-shaped spider the size of a logger’s hand scuttling across the wall of the living room. It turned out to be a huntsman spider – apparently it won’t kill you – I didn’t care – the psychological damage had already been done…

If we hadn’t retraced our own footsteps in the sand on one of the beaches back to the car park trail we may very well still be there now trying to find our way out of the never ending dazzling white sand dunes…. which wouldn’t be such a tragedy ;-).

I hadn’t known it at the time I booked our weekend trip to Tasmania but it transpired that the whole island is a big foodie destination. This was excellent news for us – courtesy of their reasonably mild weather and small-scale production, self-sufficient, eco-friendly, organic farming with an ethos of sustainability. We didn’t consume or imbibe a single calorie which wasn’t absolutely worth it – everything was top-notch :-).

Obviously it would have been ideal had we had more time to explore our intended destination (the least said the better as Geoff has only just been allowed to poke his snout tentatively out of the dog house 😉 ). But I guess now, at least, we have a reason to return to the island to spend more time driving and exploring the backroads, beaches, rivers and mountains…so long as one of us remembers to bring a driving license along! :-).