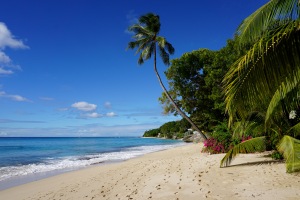 …rum cocktails; warm turquoise waters lapping the tree shaded beaches of the exclusive west coast resorts; an interior landscape of small villages and rolling hills of sugar cane plantations; huge atlantic waves crashing onto the rugged limestone cliffs at the northernmost point of the island; miles of deserted palm-fringed white sand beaches in the southwest (our favorite part of the island); fishing villages; colorful fish shacks at the renowned Oistins Fish market; bougainvillea and orchids; forests of bearded fig trees and other exotic flora… all quite lovely…

On the other hand all is not absolutely perfect in paradise… the beaches of the south around the capital, Bridgetown, are distinctly less appealing and considerably more overcrowded and touristy. Bridgetown itself, is, without doubt, a top contender for the least appealing capital city of any of the Caribbean islands… aside from the Parliament Buildings the architecture leaves almost everything to be desired – grungy, scruffy and grubby looking and distinctly 1970’s in design…shops filled with the usual uninspiring gamut of vital purchases for the cruise ship vacationers arriving at the nearby port – from t-shirt stores to the ubiquitous Columbia Emerald stores. Goodness knows if we had arrived on a cruise and were faced with a day of exploration in Bridgetown or its surrounding beaches we would knock the rest of Barbados from the “must-revisit” list forever….

Luckily, however, we saw the rest of the island from the comfort of our overpriced rental car 🙂 We set out to explore the island at our usual pace whilst our friends, with whom we were vacationing, enjoyed one of the best views of the island – gazing onto the sun-kissed glittering Caribbean sea at Payne’s Bay – from the comfort of their sun loungers, cocktails in hand and the warm waters lapping at their toes.

To be fair Rob did actually move from his piece of prime real estate to race about on jet skis at full pelt with Geoff – both gleefully trying to kill themselves as they flew (in Geoff’s case quite literally) across the waves with the wind in their hair. Rainzley and I had a girls shopping and lunch day curtailed marginally by the interesting swelling of Rainzley’s right foot which was taking place before our eyes. The voracious mosquitoes had obviously been enjoying the tasty delights of British flesh for a few days before our arrival on the island and judging by the size of some of the bites I’m surprised Rainzley’s leg hadn’t actually rebelled and dropped off entirely 😉

Anyway… concerned that the horrible things might need some medical attention we wandered into the medical centre to be greeted by the hacking, sneezing and spluttering of another Brit carrying some disgusting contagious tropical disease (I was on full OCD alert as you might imagine). We watched a parade of various broken legs and ankles hobble in whilst we waited for her appointment. It shouldn’t have taken too long as there were only 4 people ahead in the queue but it transpired that there was only one doctor on duty and after almost 2 hours watching the comings and goings of various accidents and injuries we finally left clutching a pile of pills and potions. Happily, Rainzley’s leg returned to normal size and shape by the next day 🙂 I haven’t as yet (at the time of writing) contracted the foul disease which must have been swirling around our heads looking for its next victim to infect but I’m still on full alert… watching and waiting… 😉

Whilst several afternoons were frittered on the beach, our mornings were spent on the open road, map in one hand (bars of Bajan Agapey caramel rum chocolate in the other) and camera at the ready. We criss-crossed the island from our base in Holetown (our favorite town on the island – littered with the requisite cute shops, cafes and restaurants).

We ventured  to the far north where the rugged windswept coast and limestone cliffs were battered by enormous waves which rushed through blowholes and nearly knocked poor Geoff off his feet –  I was holding out for the perfect holiday snap and didn’t see it coming either 😉 …then we headed down to the bays of Cattlewash and Bathsheba on the east coast with their dramatic rocky outcrops – lethal for swimming but famous for surfing.

For a tiny island (only 14 x 21 miles) I am ashamed to say that most of the time we were hopelessly lost – not always my fault to be fair – the road signs are almost non-existent, those that were once erected are now invariably faded, impossible to read (most of them being of the very homemade variety) and/or are lying on the ground pointing in the wrong direction. To make matters even more interesting the map was vague in the extreme. It was mainly by pure good fortune that we fell upon our intended destinations at all… but in the end it was, of course, the journey which was half of the fun…I think… 😉

Lost again at the end of one such dead end, we fell upon an abandoned hotel – Sam Lord’s Castle – and drove onto the grounds to have a quick look around… an unexpected urbexing (“urban exploring” – or “trespassing on possibly dangerous abandoned sites” as it might otherwise be known 😉 ) experience awaited. Subsequently we discovered that the hotel had suffered a devastating fire in 2010 and the grounds were now, in 5 or 6 short years, overgrown with creepies and crawlies which made for some interesting shots 🙂

Back at the beaches, the southwest coast was absolutely fabulous… Foul Bay and Bottom Bay (if we ever have to find them again I suspect it would be impossible 😉 ) were our clear favorites… much of the appeal owing to their remoteness and inaccessibility, of course!

Driving through the hills, country lanes and along cliff tops bore a considerable resemblance to off-roading much of the time. Roads in the interior and on the rugged east coast would be better described as muddy, pitted and cratered tracks. The rental car (a brand previously unknown to me with the stability of a blancmange and the unbridled power of a moped engine) managed to traverse the craters without plunging us down any of them to our untimely deaths but it really wasn’t quite as successful at climbing hills. Ascending from the coast up one particularly steep and winding road I suddenly realized that the car was being thrashed at full revs with Geoff’s flip-flopped foot to the floor but we were entirely stationary… The only way to make it out in one piece without rolling back down the hill out of control was to reverse downhill as quickly as possible before another vehicle with an engine more powerful than a hair dryer came careering up behind us. Having reversed at full speed and reached the bottom of the hill again in one piece Geoff stuck the gears in sport mode slammed his foot to the accelerator and I peddled like crazy along with him, feet to the floor like Wilma Flintstone, with my eyes shut and fingers crossed that no-one would be speeding down the hill around the blind bend towards us as we sped uphill towards it 😉

In the centre of the island we visited Anthony Hunte’s garden – Barbados’ most famous horticulturist. He has created a veritable magical wonderland of secret gardens, sculptures and winding paths overflowing with exotic, leafy, flowering plants. Geoff was highly skeptical when I suggested we criss-cross the island (yet again) navigating its labyrinth of dirt tracks and dead end roads in order to wander around a garden when we could have been sunning ourselves on the beach. However, I was pleased to note that ultimately even he was quite speechless at the overwhelming scale and beauty of the project – 20 years in the making – a little piece of paradise created in a sinkhole – 150 feet deep and 500 feet across caused by a massive landslide.

The final excursion inland was to locate Turner’s Hall Wood – the last remaining natural area of woodland on the island – old Barbados as it was before the sugar cane cash crops destroyed the wilderness. I am not entirely convinced that we would have expended quite as much effort to locate it for a sweaty hike if Geoff hadn’t read over my shoulder that it was also the last place on the island where wild green monkeys still swing freely through the trees (allegedly). After some considerable time driving backwards and forwards down one dead end after another (following the vaguest directions I have ever had to follow in my life) we pulled up at the end of the line outside a ramshackle house at the top of a remote hill “somewhere” inland… with a scrubby path off to the right… and to be fair… just as the instructions promised.

Unsure where to leave the car we decided to abandon it at the side of the road and we disappeared between a gap in the trees and followed the unmarked track into the woods in enthusiastic search of wild monkeys – dressed entirely inappropriately in running shoes. 2 hours later we re-emerged – not a single sign of a monkey anywhere – but we had found plenty of shoe-sucking 3″ deep mud to slip and slide about in on the steepest hike of the island. Survival was ensured only by joint cooperation – navigating the path both up and downhill whilst clinging on for dear life to each other. By some miracle, whilst one of us slipped and tripped the other one of us was solidly upright… and vice versa… all the way back to the car 😉 At least the view from the top of the hill across the hills to the coast was worth the slippery climb 🙂