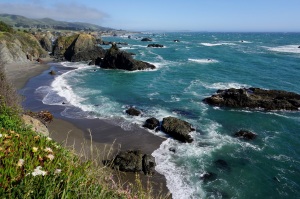 San Francisco and the California coast in May! Absolutely gorgeous as always 🙂

The hedgerows, coastal trails and headlands are strewn with a kaleidoscopic variety of multi-colored flowers blanketing the landscape…from chest-high purple and white wallflowers, red hot pokers and arum lilies down to ankle-high red and orange indian paintbrush flowers, orange California poppies, miniature purple irises and a myriad of gorgeous, exotic-looking delicacies many of which I recognized from my childhood as gracing my mother’s stone patio pots back in England. In fact, many of the more fabulous plants and flowers tended lovingly by my mother in the garden of my childhood home grow in abundance and with wild abandon in this part of California.

Against a backdrop of a crystal clear blue sky and the sunlight glistening on the crashing waves of the Pacific Ocean, hiking through the flowers on the headlands has always been one of my very favorite springtime pleasures in Northern California.

Of course, there are one or two downsides to the spring climate too – waiting with trepidation (will it? …or won’t it?) for the morning fog to clear and the occasional bone-chilling temperatures on a windy day out on the headlands 😉 Still, nothing was going to ruin our “romantic” weekend in Mendocino bundled up under layers of wind-cheaters and hiking jackets. The swimsuits never made it out of the suitcase… what on earth made me pack them in the first place I cannot imagine as even with the fondest of memories I have never stuck more than a toe (very briefly) into the icy waters north of San Francisco 😉

But I jump ahead… the first part of our week was spent in Oakland where Geoff was attending a conference. It had some trendy new restaurants which were surprise finds as I have never taken the remotest interest in this port city across the bay from San Francisco. And if I’m honest, the best part about Oakland for me was the 1 minute walk to the BART (rail) station from the conference hotel and the fact that 2 stops later the Transbay (underwater) Tube deposited me at the centre of my universe for 4 days – Embarcadero station and the fabulous Ferry Building. From here I could zip about the city to my heart’s content with my Clipper Card fully loaded with a weeklong Visitor Pass. Feeling lazier than normal (and having vivid memories of how steep many of the streets actually are in this city) I braved the BART, the MUNI underground system, the mind-boggling city bus system and, best of all, the historic cable cars 🙂 The F Line is a heritage streetcar service using restored, retired street cars from San Francisco’s own former fleet and from around the world. I fully grasped the multi-national nature of the endeavor to keep these wonderful cars active when I clambered onto one and found myself reading seating and entry and exit instructions in italian 😉 Anyway, the F Line runs from Fisherman’s Wharf along Embardero (passing the Ferry Building) all the way across the city via Market Street to Castro District – it was my lifeline to everywhere 🙂 The much more famous Powell-Hyde cable car with its dramatic views across the city as it careens up and down the steepest of the city hills offering glimpses of Alcatraz, the Coit Tower, Russian Hill and San Francisco Bay is understandably on every tourist’s to-do list… the queue snaking around the street at the cable car turntable is probably not 😉

Anyway, courtesy of the complex, highly efficient and comprehensive public transport system I traversed the city from the wharves to The Haight to The Castro to Chinatown to the posh Union Street shops to North Beach to Mission with no particular plan and probably highly inefficiently from a time and motion point of view. However, I managed it all without so much as breaking a bead of sweat 🙂

When you have an unlimited travel pass frankly it doesn’t matter if you go round in unexpected circles, or if you miss your stop because there are no announcements and the map is bouncing around too much on your knee to read the tiny writing and tie it up with the non-existent street signs, and/or the bus drivers don’t seem to be entirely clear where they are heading themselves! ?? 😉 Oh well… I may not be entirely cut out for the public transport system (I would rather have had a limo driver at my disposal, of course) but I surprised myself and managed not to get too tangled up in the bus schedules and, happily, I avoided wandering into any particularly unsavory parts of the city armed only with a camera and a Clipper Card 😉

So… favorite parts of the city:

On my final Geoff-free day I caught a ferry to beautiful sunny Sausalito across the Bay passing Alcatraz, yachts zipping across the waters and I had my first (albeit long distance) view of the Golden Gate Bridge of the trip. Typical! 😉 Having been to Sausalito several times in the past I was less interested in meandering through the shops and neighborhoods and more interested in finding a way out to the houseboats at the extremity of town. Eventually my path crossed with a bus going in the right direction so I leapt on for the ride and headed out of town. The houseboats were quite lovely and typically quirky, some with spectacularly elaborate pot plant gardens. It was an hour or so very well spent and all was perfect with the world until I wandered back to the main road to find a bus back to the ferry terminal to catch my ferry to San Francisco. From a distance I could see a bus at the bus stop but I would have had to sprint faster than Flo-Jo to have caught it so I let it go expecting another one shortly (after all I had never waited more than 10 minutes for any form of transport in San Francisco). So I waited and waited and panicked and waited and eventually an hour later with 12 minutes to spare to catch my ferry a bus arrived to take me 10 minutes into town… and this was my final lesson in why I am really so much more suited to a private chauffeur 😉

The weekend had finally arrived! Geoff was let out of school 🙂 We picked up the rental car and spent most of the weekend stoned – courtesy of the previous renter who had clearly smoked a lot of marijuana and had tried to cover it up with an air freshener 😉 It didn’t work 😉 So, with windows fully wound down (lest we were stopped by the cops for speeding or any other minor misdemeanor) and with a brisk breeze blowing the cobwebs out of our ears we crossed inland to the Sonoma Valley to meander through the vineyards and then took the road northwest heading out to Bodega Bay, famous for its fish and chips. They were awful. Very possibly the worst fish and chips we have ever eaten. We’ll leave it to a great British chippy to cook them for us in future 😉

Onwards and upwards on the utterly spectacular Pacific Coast Highway… stopping to stretch our legs at countless beautiful headlands and to skip through the wildflowers before we finally arrived at Mendocino. Fans of Murder She Wrote will know that Jessica’s home in fictional Cabot Cove, Maine was here at Blair House 🙂 Geoff was distinctly non-plussed with my piece of Hollywood trivia… well… I was excited to see it again anyway! 😉 😉

And so, I return to the beginning of the blog. Wild flowers; coastal trails; hiking through Russian Gulch State Park on the Fern Canyon Trail to the waterfalls; a desperately cute town on the wonderful Mendocino Headlands; a charming bed and breakfast; delicious local wine and excellent restaurants. What more could you want from a weekend on the California coast? 🙂

Oh yes… there was one more thing we wanted… to see the Golden Gate Bridge again… and there it was in all of it’s sun-drenched sunset glory as we headed back on 101 past Sausalito towards the city! The perfect end to a lovely weekend 🙂