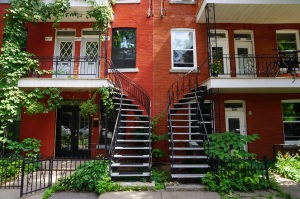 I followed along (like the long-suffering but dutiful wife that I am 😉  ) for a trip to Canada whilst Geoff had work to conduct with colleagues in the Montreal office.

I generously offered to sacrifice my rapidly expanding waistline to test the various cafe and coffee shop options for Geoff’s weekend off. That’s just the kind of gal I am 😉

…and should the sugar high from breakfast begin to wane, there is no better chocolate almond croissant in the entire state of Quebec than that created by the fair hand of Monsieur Faure at his very fine Maison du Christian Faure….

The restaurants are incredible, the chefs innovative and the quality of the fresh, local ingredients superlative (at least at this time of the year!)

If it weren’t for the brutal winters and the fact that we would both weigh 400 pounds within a calendar year, we could undoubtedly live here for the croissants alone… probably residing in one of those beautiful terrace houses with the winding staircases on a peaceful tree-lined street in Plateau Mont-Royal or Mile End (or if our numbers came up we might splash out on one of the fabulous residences overlooking the Saint-Louis Square)…

… anyway… if we lived here I’m guessing that after a leisurely breakfast at a window table at O et G we would meander through the pretty flower-filled streets of Vieux Montreal, chat with the artists at Place Jacques Cartier, stop in at Crew Collective for (another) coffee in the spectacularly gorgeous re-purposed Royal Bank Tower with its chandeliers and gilded ceiling, wander down to Vieux Port and (in order to burn off a small fraction of the calories) we would probably rent pushbikes and join the throngs of tourists and locals jogging, cycling or strolling along the Saint Laurence River and the Canal de Lachine in the summer sun…after that we would pay a brief but meaningful visit to Monsieur Faure for sustenance… we would waddle through the Place d’Armes and contemplate which one of the few hundred absolutely amazing restaurants in the city we should dine at….

And if we should tire of the old city we would head out to do much the same again in Plateau Mont-Royal, Mile End or Petite Italie… only we may also throw in a side trip to Marche Jean-Talon for some local produce and take a picnic up to Parc Mont-Royal or one of the other innumerable green spaces available to the lucky residents of Montreal 🙂

…which, incidentally, is exactly what we did! 😉 🙂

The city is also filled (so I’m told) with interesting and diverse museums. I still recall with a shudder the Insectarium which we ventured into many years ago, encouraged by friends to sample the wittchety grubs, the ant macaroons and the fried crickets. I have no idea if you can still do that all these years later but if you can I don’t think I’d join you… you’d find me waiting for you back at Monsieur Faure’s with a cup of earl grey and a chocolate almond croissant 🙂