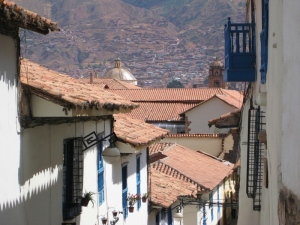 Here are the photos: https://www.dropbox.com/sh/1u8qd2xdhiioulp/c5_iD29nHS

Were shaken out of bed by earth tremors in Lima on our first morning – bit of a rude awakening at 6am, frankly – especially 10 stories up – and it was a fun start after only arriving at 2am 😉 Weren’t mad about Lima – glad it was a 1 night stop-over –  pollution horrendous, weather dodgy and a bit chaotic so massive sigh of relief when arrived in Cusco to blue sky and fantastic scenery 🙂

Absolutely loved Cusco though it is vy touristy as it’s the stop-off city for the Andes/Macchu Pichu but the sort of place you can sit in the gardens of the city squares for days watching the local color go by – of which there was plenty! 😉

Loads of people wear the national costume in the towns – it was like stepping into the pages of the National Geographic – the colors and designs are amazing.

Saw the weirdest things – llama with earrings and necklaces, baby alpaca in baby slings – and that‚s just in the city centre;-) Having said that , it was also a quite sophisticated place which impressed us …well maybe aside from the local delicacy – baked guinea-pig which Geoff insisted on sampling – Gary and I quite lost our appetites when it arrived at the table – completely intact with little furry crispy ears and fangs – anyway it tasted better than it looked thank goodness 😉

Macchu Pichu was a breeze to get to (can’t say it would have been nearly so easy for the Inka 😉 ) – 3 hours on the train through the Sacred Valley before it wound into the Andes and disappeared into the jungle/wilderness… Amazingly, we decided not to hike the trail for 5 days instead!! 😉

MP was quite stunning – no photos give you any sense of being there – the place is absolutely in the middle of nowhere perched on an Andean mountain, impossible to see from below and totally surrounded by mountains as far as the eye can see they have no clue what it’s doing there, when it was built (though it seems it was probably at the height of it’s short lifespan in the C15th.. or why the Inka left/died off..but the Spanish never found it so they couldn’t have been guilty…

..with all that uncertainty the place is a hotbed of weird theories and mystic travellers – the least spiritual of whom were the large contingent of Herbalife employees in lime green jackets sporting “wanna lose weight – ask me how” badges (in espanol of course) on a daytrip from Lima (lucky us!!) who spent most of the time whooping and sticking their thumbs up at the cameras – its’ a Peruvian thing I guess – but the most entertaining and mystical of all were a bunch of Brazilian Reiki enthusiasts (all in purple t-shirts) who stupidly decided to plonk themselves down right by our previously peaceful lunchspot, strip off their socks and shoes (obviously they hadn’t spent much time side-stepping the copious quantities of llama droppings as we had by this time – llama being the numerous and sole residents of MP now), laid down in it all (yummy) – and proceeded to do whatever they do in little groups while the head honcho danced about them drawing circles and writing in the air above their heads- ummm – we’d have paid good money for that anytime…what luck;-)!!

Apart from hiking round MP (as opposed to up it) and eating some of the best French food we have ever had – especially for a hick town in the middle of nowhere;-) we also managed to squeeze in time for a brutal assault by a local masseur specialising in Inka massage (!) which was- umm – relaxing – never knew our legs could bend back that far…

Then back to Cusco for 3 days to enhance my jewellery collection with some “real” Inka gold (funny I thought the Spanish whipped it all a while back 😉 !); pick up a touch of food poisoning – well what good foreign holiday would be complete without it??; AND visit the famous indigenous Sunday markets – as you can see from the photos – not short of local color either couldn’t resist a handmade Peruvian blanket and a pair of baby alpaca slippers – of course!

Anyway – that’s all from South America!